Taking on the Sex Symbol 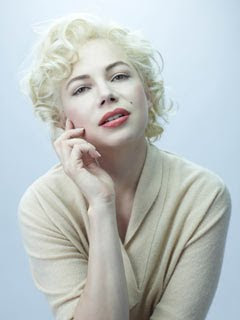 Two Marilyn Monroe movies are a-comin’, and production on the first one (the one with Michelle Williams) is already underway.
Naomi Watts will play the iconic Hollywood figure in another.
Pictured here is Williams, who’s starring in My Week with Marilyn opposite a very British cast that includes Tony winner Eddie Redmayne (The Other Boleyn Girl), Kenneth Branagh, Judi Dench, Dominic Cooper, Harry Potter’s Emma Watson, and Julia Ormond.
This movie follows Monroe during the week she left Tinseltown behind to spend time with Colin Clark (Redmayne), a lowly assistant on the set of The Prince and the Showgirl, who escorted her around Britain after her new husband, playwright Arthur Miller, left the country.
Photo: EW.com.
Posted by Martin Haro at 8:11 AM