A cynic like, say, myself would dare put it out there that the oh-so-good-in-Conviction Hilary Swank probably thought she had another Oscar – her third – in the bag...and that it’s really just too bad that Annette Bening saw The Kids Are All Right come out just a few of months ago (since Bening has lost out to Swank come the big night twice before). 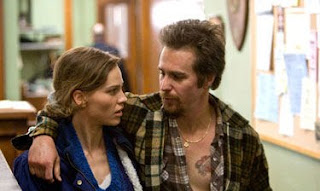 The thing about cynicism, though, is it’s often misguided. If I was a betting man I’d be a losing man. So rest easy, A.B.

Look, Conviction is a fine movie, but Swank ain’t getting invited to the party, as a nominee, next winter. At least I don’t think so. Not anymore (bye, buzz!).

Directed by Tony Goldwin, this courtroom drama is an adequate piece of based-on-an-incredible-true-story...uhh...story about a woman who stops at nothing to prove her brother’s innocence.

The problem is it’s also a bit too Lifetime-y for my taste, which is why the actress’ tenacious, sure, but nevertheless affected-by-a-borderline-melodramatic-script performance ultimately doesn’t transcend the movie’s by-the-number-ness.

Swank plays Betty Anne Waters, a high school dropout from the wrong side of a Massachusetts town whose brother, Kenny (Sam Rockwell), is convicted of murder and sentenced to life in 1983.

Betty Anne and Kenny are like two peas in a pod. The two are thisclose; they’ve always had to rely on each other through thick and thin since their mom was, well...trash who didn’t mind them like, at all. Theirs is a bond that is like no other: unbreakable, unshakable, and unconditional.

When Kenny is sent away, for a crime he says and his sister knows he didn’t commit, Betty Anne puts her own life on the back burner to champion his tarnished name. She embarks on a lifelong quest to prove Kenny was wrongfully pinched for the did by a tough-as-nail cop (Frozen River’s Melissa Leo), and even puts herself through college and law school, sacrificing her marriage and her role as a mother in the process. It’s what she has to do...and by golly if she’ll do it, even if takes her years.

It’s a tall task she’s taken on, and while no one understands it, while everyone tells her she should accept the facts (those everyones are promptly shunned), Betty Anne remains steadfast.

With the help of a supportive friend (Minnie Driver) she allows herself to pick up along the way, she pores over piles of suspicious evidence and retraces the steps that led to Kenny’s arrest in the hope of finally winning her brother’s freedom.

Eventually, her quest gains enough traction that she picks up another ally, a lawyer (Peter Gallagher) who specializes in this type of case, and Betty Anne’s dream to free her brother begins to become a reality.

What Conviction fails to capture, though, is just how daunting this mission must’ve been. I felt like the movie spent a lot of time walking us through the case, which was resolved rather quickly – I say acknowledging that I live in a post-procedural-TV zeitgeist...and that things weren’t quite so easy – and not enough showing us Betty Anne getting her fighter on. I guess not all heroines in this type of movie are Erin Brockovich-esque, but still, I wish Swank had been given something showier to shine with, you know.

Perhaps that Oscar buzz would still be around, but since the actress also produced the movie I will say, sans cynicism, that she really wanted to tell this story, and for that she can reap the biggest benefit, just like her subject matter: satisfaction in self.