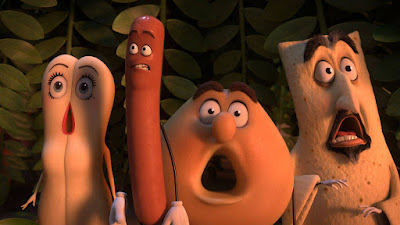 You guys. You have to see Sausage Party at the movies this weekend...and you gotta promise you’re gonna laugh.

If you don’t, then, trust, you’re a special kind of humorless dolt.

From the moment earlier this summer that I saw the trailer for this Seth Rogen-co-produced-and-co-written computer-animated comedy co-directed by first-timer Greg Tiernan and animation vet Conrad Vernon – about celebrity-voiced supermarket food who get to pondering their reason for being and their destiny – I just knew. I knew that this...this was gonna be unlike anything I’d seen before, plus hilarious (highlarious?) and surprisingly deep.
Which – whaddya know – it is.

I boldly will even go as far as to say that this is Top 10 material for 2016. If anything, Sausage Party is the best party of the year.

So suck on that, donkeys and elephants. You wish.

Featuring an all-star cast of funny character people (including leading lady Kristen Wiig and key in-on-the-joke-yet-thoroughly committed supporting players like Jonah Hill; Bill Hader; Michael Cera; Danny McBride, from HBO’s Vice Principals; Craig Robinson, from TV’s The Office; Paul Rudd; Edward Norton; and Salma Hayek), the film zeroes in on hot dog sausage Frank (Rogen), one of the many dwellers of the Shopwell's store who is eagerly awaiting to be picked by a god – i.e., a human – so he can move on to what he and his call The Great Beyond.

Little do they know.

Frank, as he would, sits near a package of buns that contains the object of his affection, a knowingly flirty, yet virginal lass named Brenda Bunson who’s expertly brought to life by Wiig. Their pure-kismet relationship, as written and as played, is beautifully and raunchily chronicled, ups and downs and all. Like double entendres and this material, sausage and bun, they were made for each other, and so were Frank and Brenda. If only they could finally come together to fulfill the plan for their lives....

Lucky for them, one day a god decides it’s like, their turn to live happily ever after, right – except what awaits them is a painfully WTF eye-opening reality-check moment filled with torture, certain death, and definite death at the mouth of a merciless, hungry deity.

Oh yeah. Rogen and his fellow writers (Evan Goldberg, his longtime friend and collaborator among ’em) haven’t delivered simply a laugh riot but a rich and complex and layered story about survival that is, somehow, phenomenally told through the eyes of the food we eat.

These who’d-had-thunk-it characters fully mirror and echo our own differences and similarities, not to mention our fears and insecurities. There’s a warring bagel (Norton) and a lavash (David Krumholtz), who find common ground only in their shared love of hummus. A gay twinkie. A pining lesbian taco (Hayek). An old bottle of Firewater (Hader), who dispenses wisdom. Several helpless baby carrots. And a veritable douche (Nick Kroll) of a villain dead-set on making Frank suffer for getting in the way of penetrating boldly territory the way he’s been lusting about for ages. Needless to say, it is a hoot and a half to watch them work as a team to avoid succumbing to a god that doesn’t hold the fate they were promised at all, and stand up to that douche en masse.

They make it look so easy, it kinda makes you wonder why we can’t figure it out, already.

At its core, Sausage Party is a love story, but it’s also David and Goliath...an enlightened simplification of current human affairs and conflict...an adventure that cheekily tips its hat to all that inspired it (you will have a grand ol’ time spotting a number of cinematic references)...and the most human examination of modern interaction I’ve seen committed to the silver screen in a while.

You will laugh (and laugh and laugh). You’ll get sad (ish).

You’ll be disturbed (James Franco lends his talent to a twisted scene involving bath salts and an unavoidable accident that gives the food an advantage over man), and you’ll go, “oh boy.” A lot.

Most of all, you will be sooo glad you RSVPd to this shindig.

It really is one for the books.