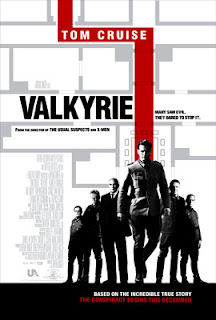 The trailer for the much-rescheduled Valkyrie, starring Tom Cruise, made its debut last weekend.

I gotta say, all that negative buzz on the Internet, it just seems like some people out there had it in for the star from the get go of this project. It looks…intriguing – and I say that so as not to pass early judgment.

The Bryan Singer-directed movie, about a plot to assassinate Adolf Hitler during the height of WWII, was supposed to come out last summer, if memory serves, then this fall. It will now open on Dec. 26, just in time for awards season.

This movie is so bad that it is getting dumped and buried by the studio that Cruise partly owns ( United Artists).

They are opening this Nazi as hero movie during Christmas, a top family fare zone.

They are going up against these family-type flicks:

But wait you say -- these geniuses are simply filling the unmet niche for adult entertainment during X-Mas. Well, they ain't alone; also opening Dec 26:

Given that they recently moved to that date from the far more attractive President's weekend, I can only see the choice as throwing in the towel. So if you value elbow room over the qulity of the movie -- it looks like Valkyrie is the flick for you.