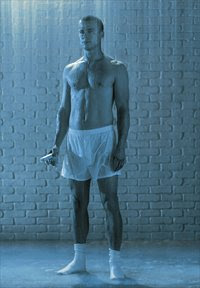 Not happy to have pledged, with partner Angelina Jolie, $2 million to help fight tuberculosis and HIV/AIDS in Ethiopia, Brad Pitt has given $100,000 to stop a California ballot initiative that would ban same-sex marriage.

Pitt’s donation reportedly is the largest donation to the cause so far from a Hollywood type.

“Because no one has the right to deny another their life even though they disagree with it, because everyone has the right to live the life they so desire if it doesn’t harm another, and because discrimination has no place in America, my vote will be for equality and against Proposition 8,” the actor, who gave to the group Californians Against Eliminating Basic Rights, said in a statement.

Brad Pitt is a friend of friends – and I heart him for it.