The Most Popular Guy in the World


It was an intriguing idea from the get-go, to make a movie about Facebook. What could it be, if not an amusing one, an, Aww-we’re-all-connected-look-us-fall-in-love rom-com? What, a fictional dramatization? A documentary? 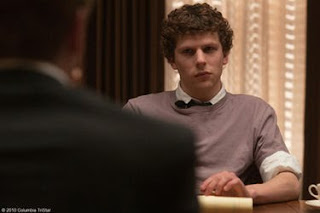 The answer is The Social Network.

Written by the modern-day poet that is Aaron Sorkin (A Few Good Men, TV’s The West Wing), David Fincher’s agile, first-rate film is a propulsive character-driven bio-drama – and an incisive one, at that – starring an outstanding young cast led by Jesse Eisenberg (The Squid and the Whale, Zombieland), Andrew Garfield, Justin Timberlake, and Armie Hammer.


The film is one of the year’s best not only because of its considerable production values, which are many, not to mention its pedigree, but because of its ability to tap into the zeitgeist in an effective, adult way.

This is a piercing look at the rise to billionaire riches of Facebook co-founder and CEO, Mark Zuckerberg, played by Eisenberg with a knowing and winning combination of unabashed ambitious a--holeness and a well-hidden insecure sort of humanity. Eisenberg’s Zuckerberg is a smug, cocky S.O.B. Is this were a straightforward work of fiction, he’d be the villain. No question about it.

Except The Social Network isn’t fiction. It’s based on actual people, on actual events, on an actual, oh-so-relevant piece of pop culture enjoyed by more than 500 million people around the planet. It’s also based on Ben Mezrich’s The Accidental Billionaires. And on accounts and, even, on anecdotal stories that Sorkin collected from various sources, including a quite famous one.

At its very core, though, this is a revenge-of-a-nerd story.

Facebook, or TheFacebook as it first went by, was born one boozy night in the fall of 2003 after Zuckerberg, cut to size by his girlfriend (Rooney Mara), goes back to his dorm, in the movie, to blog-bash her all night long. He works out his brokenhearted – more like ego-bruised – issues by hacking into the directories of all of Harvard and creating a site that pits two girls against each other so that people (i.e., boys) can rate them based on their hotness. A real classy move, one that gets him in a lot of trouble the next day (nothing that sticks, though).

Ah, but whaddya know, it also gets him noticed by a beyond-elite final club, which is just the kind of attention the Zucks (no one calls him that in the film; I just made that up) has been craving. He wants to in, even though he seems to have nothing but contempt for...anyone that isn’t him, really. It’s the exquisite contradiction of being a visionary, I guess. Or some sort of villain.

Pretty soon, he’s approached by the all-American golden-boys Winklevoss twins (played with almost-superhero-like largesse, and little movie magic, by Hammer, who some may remember from a stint on TV’s Gossip Girl). It is the Winklevi, together with their friend Divya Narendra (Max Minghella), the movie suggests to us, who actually thought of the idea that would evolve into TheFacebook. Having seen what he did scorned, they figure they need Zuckerberg to get the site programmed and functioning. They need him. Too bad, the he figures, he no longer needs or wants to work with them. He takes their idea, to build an exclusive social network, processes it to his liking, and runs with it. He runs with it all the way to Eduardo Saverin (Garfield), actually, his earnest BFF, and the guy who gives him the algorithm he needs to make his original site go wild...and the guy who ultimately would become his CFO, and soon, his ex-BFF and his ex-CFO.

The rest is e-world-domination history, but as The Social Network unfolds, it does so against the dramatic setting of two real-life-like-pretty-much-everything-else-in-the-film lawsuits: the one the wonder twins and their associate hit Zuckerberg with for stealing their idea, and the one Saverin filed for getting unceremoniously edged out of the company.

Is all of this the cost of greatness, or is it simply Zuckerberg being Zuckerberg, going with the flow of things so as not to deal with the rejection he felt when his girlfriend dumped him...rejection he never wants to feel again?

This is a guy, Sorkin’s spitfire script spins, who would rather drop you like a hot potato before you even think to do that to him.

That is what I took away, for instance, from his relationship with the siren-y Sean Parker (Timberlake), the high-rollin’ wunderkind of Napstertimes. Zuckerberg is happy to go along with everything Parker says, even dropping Saverin, but as soon as Parker screws up (which we’re told he would sooner or later), the Zucks just shuts him out, albeit reluctantly. Eisenberg played all that internal conflict brilliantly, matter-of-factly during the scene in which he gets a not-so-great phone call from Parker, like he was...hurt, even betrayed, indeed, as a matter of fact). There is so much scrap in his characterization.

The guy’s the smartest barnacle in the sea.

Wanna see and Like a good film this weekend? Then log out and get. You’ll be happy you did.