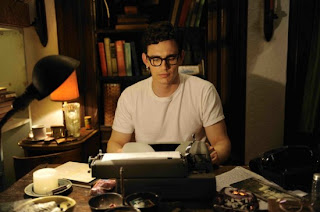 Alright, I give – James Franco is an artiste.
The guy can combine a massive comic-book franchise (Spider-Man) with buzzy turns in awards-friendly fare (Milk), find the time to attend school and nourish his many interests, and puzzle his industry with an arc on a soap (General Hospital).
It all makes for quite the eclectic résumé.
With his latest, the indie HOWL, in which he plays plays Beat poet Allen Ginsberg, Franco helps tell the story of how the writer’s work (namely his epic poem “Howl”) pushed the social boundaries of his time through an infamous public obscenity trial and went on to become a seminal piece of Americana.
The...very interesting, very experimental movie (which also features Ginsberg’s relationships toward and with other men, like Jack Kerouac and Peter Orlovsky, respectively) opens in Miami on Oct. 22.
Photo: DaemonsMovies.com.
Posted by Martin Haro at 3:41 AM

I wanna see his peacock.