It was a rainy day in Miami, and I was off from work, so I decided to take myself to an afternoon movie, which I haven’t done in forever and a half. 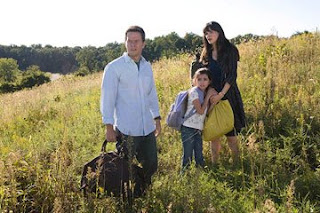 I had three choices: The Strangers, The Happening, and The Hulk. Curiosity got the best of me and I chose the second, a.k.a. M. Night Shyamalan’s latest.

I should’ve chosen The Strangers (apologies go out to Scott Speedman). Nothing against The Hulk, but clearly, I was in the mood for a little spine-tingling.

But back to The Happening….

It stars Mark Wahlberg as a high school science teacher who leads his wife (Zooey Deschanel) and colleague (John Leguizamo) from the big city (Philadelphia) into the country as an inexplicable and unstoppable event ravaging the Northeast threatens their lives.

FYI/hint: The movie was originally titled The Green Effect.

Shyamalan hasn’t been able to generate the sort of post-movie buzz he did with The Sixth Sense with any of his follow-ups. This isn’t the exception.

Sure, he peaks the audience’s interest before his movies open, but not since his much-appreciated 1999 breakthrough has he not made this audience member feel like he got his money worth.

What I’m saying is watching The Happening is an exercise in indulging a director’s tired ol’ shtick. A shtick with really wooden, implausible dialogue (there’s a scene midway through the movie that is quite embarrassing – Wahlberg and Deschanel really deserved a lot better).

There are tense moments in the movie, but they don’t amount to anything.

At least the allusions to Sept. 11, terrorism, and, paramount to the plot at hand, the deterioration of Mother Nature’s health and its effects are made palatable by Shyamalan’s wisest choice: he did not write himself his traditional part of the Man with the Answers.

He really should try something new, though, like directing a Marvel property. There’s a few of those in the pipeline.