The Oscars Get Two Hosts 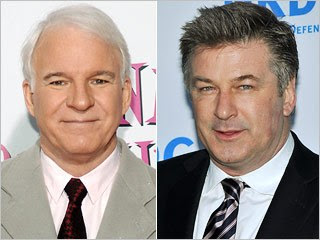 Hugh Jackman’s such a man, it’ll take not one but two people to fill his shoes as the host of next year’s Academy Awards.
Steve Martin and Alec Baldwin have been announced as co-hosts of this season’s Oscar telecast on March 7.
That’s right – co-hosts...and I kinda love it.
Martin has long been a favorite Oscar host of mine, and Baldwin’s pretty “Dyn-o-mite!,” too. So I’m looking forward to seeing what the It’s Complicated co-stars will do together.
Photo: EW.com.
Posted by Martin Haro at 5:33 PM