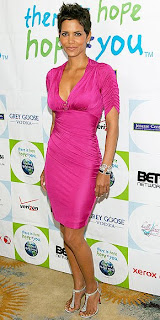 News from the festival is coming rapide et furieux, and the latest headline comes from Wachowski siblings, who have revealed they’re talking to Halle Berry and Susan Sarandon for parts in the Tom Hanks-led Cloud Atlas adaptation they’re working on with Tom Tykwer (Run Lola Run).

Production on the movie based on the David Mitchell novel is set to begin in September.

Photo: People.com.
Posted by Martin Haro at 8:21 AM