What Will Happen to Tris Prior? 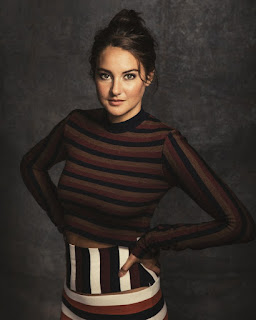 For weeks now, the talk in Hollywood – and beyond – has been that the powers that be were thinking of forgoing a theatrical release for The Divergent Series: Ascendant, the fourth movie in the franchise based on the Veronica Roth YA novels that was set to open next summer, in favor of instead delivering a TV movie that would set up a TV spin-off series. This created some on-the-record confusion among the cast – I hear ya, Miles Teller – and even for its star who, as early as Monday wasn’t sure what was going to happen.
And it sounds like Woodley’s still not entirely clear on what is going to happen.

“[I’m on board], I mean, if it’s a movie,” the actress said on the Today show earlier this week, noting that she did not sign up to do a TV movie in the nicest, clearest way possible. “They haven’t finalized any decisions, so it’s actually a moot point to talk about it now, out of respect to [the studio] and everyone involved.

“I’m not exactly sure where they stand.... I signed up to tell the whole story of Tris [Prior, the franchise’s heroine], and I would love to be able to do that. Nothing would make me happier.”

Totally get what Woodley means.

Like, if they want to take this story into televised territory, they should script a clever way to have a theatrical Divergent Series: Ascendant end in a manner that lends itself to a TV spin-off. Cheapening things because The Divergent Series: Allegiant didn’t exactly hit at the box office earlier this year is kinda insulting to the cast and crew that have worked so hard on these movies and with a specific goal on view. Not to mention the audience, who has invested into these offerings in a certain way.

That’ll teach dem execs, though: At last, we saw right through their silly modern-day four-part trilogies, and we/I think their new plan sucks. So they best remember they have to do right by the public, not just by the bottom line.