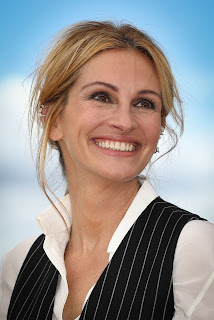 American Sweetheart Julia Roberts is breaking bad.
The Oscar winner is fixin’ to produce and star in an adaptation of Sam Rule and Kelli Peters’ “I’ll Get You!” Drugs, Lies, and the Terrorizing of a PTA Mom, the sordid story of some Orange County school parents’ plot for revenge on a woman that not only turned her life upside down but also shook their community to the core.

I’m pretty sure I was told about this crazy story like, 10 days ago or so, after someone who is quite clever read about it in the L.A. Times.... See, Peters was a PTA president and volunteer who unwittingly angered a full-of-itself couple when she kept their son waiting a little too long for their taste during the after-school pick-up run. (Rule is the pseudonym employed by a New York Times writer that contributed to the writing of the tome.)

People can be so ridikolous.
Roberts is the first name attached to the project, which is clearly coming together fast.

Photo: HawtCelebs.com.
Posted by Martin Haro at 8:58 AM