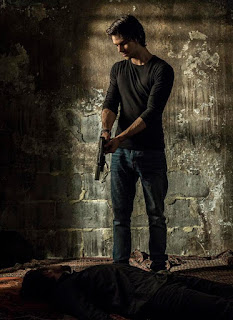 Well, this is certain to have ruffled some feathers.

Check out this first look at Dylan O’Brien (The Maze Runner) as American Assassin Mitch Rapp. Do you see what I see?

How could you not, right? That is one big gun that young man is carrying – and, for once, I am not being a facetious.

You probably know by now that Jason Bourne took a bit of a stumble earlier this summer, when the powers that be’s marketing materials were called into question for their depiction of that kind of weapon at a really poor time to be depicting ’em in movie posters or to appear to be glorifying their use. I can’t imagine how anyone didn’t learn a lesson there, but here we are, with the O’Brien – who headlines an upcoming adaptation of the Vince Flynn series of books, as a CIA black-ops recruit mentored by a Cold War vet (Michael Keaton) co-investigating a wave of apparently random attacks on military and civilian targets for Sanaa Lathan – all gunned up and ready for action.

Obviously, someone thought this would entice us into putting this one on our lists. Alas, if I – who don’t usually much care for the sort of controversy that engulfed Matt Damon’s latest outing as our favorite amnesiac spy – thought of all of this at first glance, then you can sure other people may have had a similar reaction. Or worse.

I will reserve judgment, as always, on this one, especially because Taylor Kitsch is playing the bad guy. However, I will continue to disbelief the incompetence of this badly taken first step.