Along Returned the Spider-Man 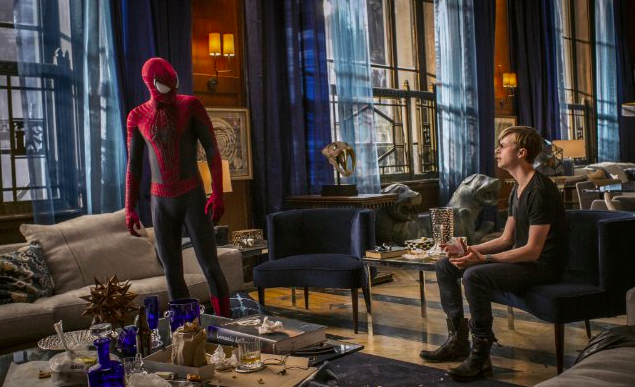 It takes Andrew Garfield’s Peter Parker a really long time to suit up again and shoot his hella-heroic web once more as our friendly neighborhood Spider-Man in The Amazing Spider-Man 2.

But don’t let me start telling you about the end of this sequel to 2012’s The Amazing Spider-Man quite just yet because plenty happens before we get to that point.

The blockbuster opens with Peter and his first true love, Gwen Stacy (the invaluable Emma Stone), about to graduate high school. He still doesn’t know why his parents (Richard and Mary Parker, played once again by Campbell Scott and Embeth Davidtz) left him with his Uncle Ben (an unseen Martin Sheen) and Aunt May (Sally Field) when he was a child, never to come back into his life. And he’s still struggling with breaking his promise to stay away from Gwen, something he pledged to her dying father (Denis Leary) in the first of director Marc Webb’s movies.

But life is rather good. Even though, like I said, Peter’s having a hard time with that promise thing, as heroes usually do.

And thank goodness he does because like, otherwise, The Amazing Spider-Man 2 would be a terribly loud, CGI fest.

Visually, the movie is a feast (although a little too Orlando theme park-y when it soars all over the New York City landscape), but story-wise, it feels overstuffed.

A prologue explains what the deal was with Peter’s parents (his father was a scientist at Oscorp Industries who, when he discovered some nefarious doings, decided to protect his child and the world from them in the most illogical of ways, IMHO).

Paul Giamatti’s Aleksei Sytsevich (the man who eventually becomes the Rhino) is quickly introduced and saved for later, while Jamie Foxx’s nerds it up as Max Dillon, the emotionally needy Oscorp punching bag that transforms into the patsy-ish Electro, and Dane DeHaan has to all but speed through his Harry Osborn-to-Green Goblin metamorphosis.

Not to mention, a young, raven-haired lady named Felicia (Felicity Jones) teases the probable arrival of Black Cat on the scene down the follow-up line (maybe in the 2016 threequel, girl...or the 2018 fourthquel!).

It all adds up to one heck of a lot, but through it all, it is still the relationship between Peter and Gwen (and the chemistry between real-life couple Garfield and Stone) that keeps us connected to the movie.

So when that connection is – Spoiler Alert! – broken and lost, it is a most dramatic, super-sad thing.

The Amazing Spider-Man 2 only allows Peter (and us) a quick montage to grieve before he has to buck up, pick his hope up from the floor, and swing back into action.

Now, while, clearly, obviously, things are only gonna get bigger from now on, if that’s even possible (which it is, for here come the Sinister Six), it’s sequences like the ones I’ve just not described, that will set this Spidey franchise apart from the beloved one that preceded it. The powers that be should try and do well to give us more of them and less noise moving forward. They are better for the soul of the moviegoer and the bottom line (they are way cheaper to produce, after all).

All this to say, Shailene Woodley or whomever ends up playing Mary Jane Watson has her work cut out for herself.

Peter Parker and we are gonna need her to be...amazing.