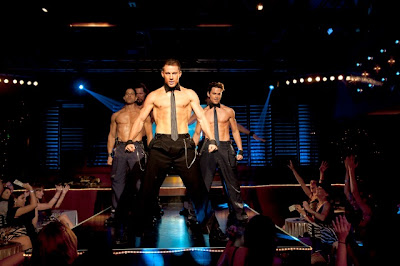 I think I know the answer to this question, but are you ready for some Magic Mike?

’Cause I know you know that I have been for quite some time.

Well, it’s almost June 29, at last – but the Steven Soderbergh-directed eye feast (my, you have earned your spot in heaven, S2!) is opening in less than six hours. So the noise you hear is the sound of thousands of ladies (and their gays) like, rushing to the nearest theater double-horny and double-pronto for a midnight screening.

What awaits them there is...a dramedy that totally surprises about friendship and not-so-young love?

Wait, hold up – you probably thought this movie was just gonna be about this charming guy Mike (played by the beyond-irresistible Channing Tatum, proving once and for all that he has arrived) and his studly strippin’ band of bros (Joe Manganiello and Matt Bomer among them) shakin’ their junk for the cameras, huh.

There’s plenty o’ that, but the powers that be have dared give the blockbuster more than titillation – they’ve come up with a whole story, based in part on Tatum’s pre-acting experiences as a real-life booty shaker.

Good thing, though, that, on its own, the story holds its own (light) weight. Looking past the bronzer that covers the façade of the main character and his nemesis, a cowboy-twangin’ old timer named Dallas played by Matthew McConaughey – oozing equal amounts of the smarmy and the sexy – the movie is a classically told story. It’s little guy trying to make good while bigger guy tries to keep him down (ish, on the sly) as he plots an equity-promising-never-delivering plan to head south to Miami, baby, and take the Magic City by storm.

Except both dudes spend a healthy chunk of their time on screen gyrating as, say, a homeboy (people, Tatum has the moves!) or a leather-clad, harness-wearing (H-O-T!) pseudo-svengali with a penchant for folky songs and saying “alright, alright, alright” like only a Texan macho man could, thankyouverymuch.

It’s obviously all good and dandy, except I get how the subject matter may give people pause. For audiences to see women strip is one thing, but for men to do the same, well...that’s like this new frontier. Mind you, there isn't any full frontal in Magic Mike (and if there had been it woulda been a bit of a cop-out). The closest we get to som’in’ akin to it involves Manganiello’s character and how he...uh...pumps himself up before going on stage, and the beyond-tease that he offers when he’s out there in as Big Dick Richie.

The A conflict comes from the fact that Mike, a part-time construction worker who’s the the star of Tampa’s Xquisite Male Dance Review at night, is pushing 30 and still chasing his dream of becoming a furniture designer. That’s rather commendable, except it’s evident that it’s also not gonna happen because the guy has shed his clothes for 1s – and the thrill of knowing and letting every lady who’s ever come out for a night on the town know he can have them – for longer than he should have now.

When he meets Adam (Alex Pettyfer), a clueless 19-year-old, he sees a chance to do something nice for someone who 1) kinda reminds him of himself at that age and 2) maybe, just perhaps, could be groomable into something of an heir apparent. As these things go, though, shy Adam emerges from his cocoon and becomes a butterfly that doesn’t know not to test his wings so fast and willy-nilly.

The “Kid,” as he’s nicknamed, gets in some unsavory trouble – y’ know, the sort that would come from hanging out in a strip joint, with characters whose personalities the script barely explores – right, Matt Bomer? (We hardly get to know his Ken, or Adam Rodriguez’s Tito, or Big Dick Richie, for that matter. They’re eye candy, and that’s about it.)

The B story is the rapport that develops between Mike and Adam’s older, has-it-together sister (newcomer Cody Horn). This young woman is kinda out of his league because she has it going on in a different way: she’s smart and employed and she’s smokin’ hot and she wishes Adam would live up to his potential.

Mike promises to look out after the Kid, but what he fails to realize is that now that he’s met her, he’s the one that needs taking care of, for he’s begun to change...to like, reprioritize, already.

Ultimately, what Magic Mike mines are the depths to which one is not only willing to plunge to have a good time and make an honest, albeit easy living, but to analyze how well they know themselves – and what kind of decisions they’ll make once an epiphany hits. (Toldja the movie would give ya something to ponder and not just recall when you get home and are taking a cold shower.)

For Mike, the choice isn’t 100 percent clear, but the reward is...and he may just have found it in a hopeless place he’s come to know as home but may not be where his heart is anymore.

Photo: The Karpel Group.
Posted by Martin Haro at 3:41 PM