It really is what a generation has been clamoring and waiting for for like, a friggin’ decade, so, yeah, it’s true what they say about the things that come to those who wait – they’re good, and Scream 4 is no exception. 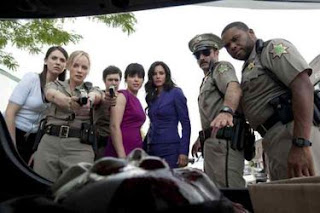 Alright, to be completely honest I can’t say the movie was all that and a bag of...uh...fresh blood. Well, there’s plenty of that, indeed, but I guess what I am saying is we’re all a little...older. And we know better.


By that, I mean, of course, original-flavor Scream, which remains the very best of the franchise for obvious reasons: it came out a simpler time and it was fresh and groundbreaking and it was fun.

Not that this fourthquel isn’t – it’s just that the sensibilities of 2011 are def not those of 1996, which is when the first installment of the successful series about the Ghostface killer(s) and the folks that all got a phone call that creepily asked “What’s your favorite scary movie” before dying a bloody death first came out.

We all (should) know the story by now: Woodsboro ingénue Sidney Prescott (Neve Campbell) spent her high school, college, and the early part of her adult years dodging a handful of knife-wielding Ghostfaces who had a number of reasons for wanting her dead.

With the help of her lifelong friend, deputy-cum-town sheriff Dewey Riley (David Arquette) and Courteney Cox’s tabloid reporter-cum-sheriff’s wife-frenemy Gale Riley (née Weathers), Sid has managed to survive three movies – and countless books about her experience, as well as movies within the movies.

Scream 4 is out to test her endurance once again.

The movie finds her returning to Woodsboro after 10 years. She’s on a book tour to promote her I’m-not-a-victim tome and to show everyone that she has moved on with her life.

Things have been quiet.

As soon as she sets foot in her ol’ hometown, though, all hell breaks loose. The body count starts to get up there, and Sidney soon finds out the killer – or killers! – is rewriting the rules on the oldtimers (and us), and he or she is threatening everyone she loves, including Dewey and Gale (who are having a crisis in their marriage), as well as her young cousin Jill (Emma Roberts) and a whole new group of students to slice and dice, including Hayden Panettiere as a friend of Jill’s, Rory Culkin, and a bunch of other up-and-comers.

Kristen Bell also pops up along the way, as does Community’s Alison Brie in a bitchin’ role.

Obviously, I can’t and won’t say anything else because that would be being a wet blanket. However, I will say I...liked Scream 4.

I didn’t love it because nothing can recapture the magic of the first one, y’ know. And I thought the first half was way stronger than the second half, which featured one too many twists for my taste (which, btw, I welcomed with open arms because the alternative just wasn’t going to do).

That said, am I watching the movie again this weekend? Heck ya I am. I’m not a fan for nothing, and that’s who this one is really for, after all – so let’s reunite and say hello to the newbies and enjoy our favorite scary-movie franchise in a dark theater somewhere...it’s going to be a scream.