The Queen of Comedy

Joan Rivers can’t get any respect. 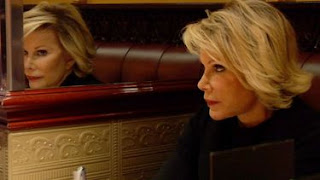 The new documentary Joan Rivers: A Piece of Work says as much as it chronicles a year in the life of the groundbreaking comedian, a life she candidly admits has had many highs and many, many lows.
In case you don’t believe me, regarding that respect thing, filmmakers Annie Sundberg and Rikki Stern happened upon capturing Rivers...at a low year. Just her luck. And just the kind of situation begging to be turned into a joke, for Rivers to take ownership of and flip on the sunnier side.
The doc is a study in exposition, a peeling of an onion, if you will.
The Joan Rivers we think we know is a brash broad with a penchant for plastic surgery. She’s loud-mouthed, polarizing, some may even say rude. The Joan Rivers Joan Rivers: A Piece of Work spotlights, though, is all of those things, and also unflinchingly human...“innately insecure,” as her daughter Melissa puts it. She’s a mother, a friend, a people pleaser who will do anything for a laugh, for work, and, yes, for some R-E-S-P-E-C-T.
This, after all, is a lady who recognizes, who knows her name usually follows an adjective, “and it’s never a nice adjective.”
Nothing is off-limits to our Joan, paver of roads for the Kathy Griffins, Sarah Silvermans, and Lisa Lampanellis that have followed in her footsteps – just don’t you suggest she make room for them.
Joan Rivers: A Piece of Work exposes all the wrinkles, figurative and literal. It opens with a tight close-up of the comedian’s make-up-free face. We spend the next few moments seeing her put on her armor: she colors her lips, she brushes her lashes, she smoothes out lines. Then she’s ready to fight the fight, to open up, to live her life and let a frank and funny slice of it be committed to film.
We learn it hasn’t always been all glamour for Rivers, and as she shows us her blank schedule, we believe it. She’s brutally honest about her early years, her time as Johnny Carson’s sidekick (a role he, evidently, never wanted her to outgrow), her husband’s suicide. She shares her wishes for what’s to come and clearly relishes the choices she’s made (of her lavish New York apartment she says, “This is how Marie Antoinette would have lived if she’d had money”).
At 76, Rivers is inviting us to respect her and, darn it, we better do, already.
Certainly, Sundberg and Stern have made it easier, while also delivering a searing commentary on this beast we call showbiz, its hunger, and its pitiless ability to chew someone up and spit them back out all in the same bite.
My Rating ***
Photo IFC Films.
Posted by Martin Haro at 11:18 AM