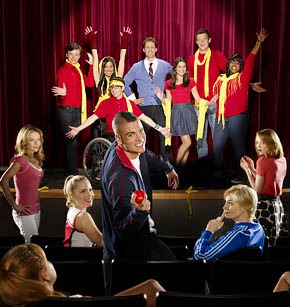 I die!
Oh my goodness, Gleeks – how would you like to be among the first to watch the spring premiere of Glee?
Fox and 20th Century Fox Television are giving fans the chance to catch a preview of that much-anticipated episode, and Miami has been chosen to host a hot-ticket charity screening on Thursday, April 8, at 7 p.m., at AMC Aventura.
Exciting, huh. Go get a hanky and come back for the deets.
Alright: Tickets are $15, and all proceeds will go toward the Grammy Foundation’s Grammy in the Schools music education programs for young people. So, go...get.
Glee will return to the tube with nine new episodes on April 13.
Photo: UsMagazine.com.
Posted by Martin Haro at 4:17 PM

Email ThisBlogThis!Share to TwitterShare to FacebookShare to Pinterest
Labels: Glee