Guess Sweet Dreams Are Made of This
Uh oh. 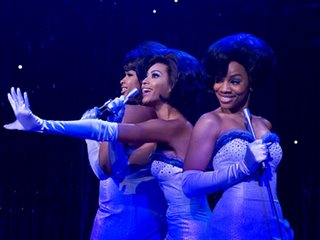 I know I risk being the black sheep of the Dreamgirls-loving herd (much like I was last year, when I didn’t hop on the Brokeback Mountain train), but here I go again: I saw the movie adaptation of the Broadway musical about the very Supremes-like trio of black female soul singers that crosses over to the top of the pop charts in the early 1960s – and I didn’t care for it all that much.
Hold the phone, hold the phone – lemme explain: I thought Dreamgirls was a fine musical. Slightly uneven and a bit long, but fine nevertheless.
Stylistically, it mirrored Chicago a great deal – especially in the beginning (not a surprise since Dreamgirls writer-director Bill Condon wrote both). Thematically, there was a lot going on, especially in the first act, what with the quick introductions and all the attention paid to Eddie Murphy’s character, the James Brown-esque James "Thunder" Early. But ultimately, I felt that where Chicago oozed sass, Dreamgirls lacked soul and heart at the most unfortunate of times. That was a problem for me because I didn’t get to develop a feel for the characters.
The story is another matter because it’s a fairly universal story about the dreams that we have all have, how life isn’t fair sometimes, how eventually we all learn what really matters.
Also, since the material has purely coincidental (wink, wink, nudge, nudge) similarities to actual Motown stars, I thought it was odd that Dreamgirls felt like two movies – one about a man (Early) at the dusk of his career, one about a group at the dawn of theirs – that didn’t quite fit together. Both interesting on their own, but, hey...maybe, I missed something.
In any case, once the movie started to focus on Effie White (American Idol finalist Jennifer Hudson), Deena Jones (Beyoncé Knowles), and Lorrell Robinson (Tony Award winner Anika Noni Rose), a.k.a. The Dreamettes, it actually started to get good. And I got to follow these ladies from rags to riches – which is always a fascinating journey. I got to see ambitious manager Curtis Taylor, Jr. (Jamie Foxx) fail to keep all of his promises as he transformed The Dreamettes into the more mainstream Dreams. And I got to see rivalries boil as lead singer Effie was replaced by the more attractive Deena and eventually dropped from the trio. But what I didn’t get to see was what made these ladies tick, really; I felt as though I never got to know them all that well.
And that’s just fine, just not Best Movie of the Year-fine.
Even the musical sequences left me wanting more; they were dazzling, but they seldom revealed the characters’ drive, their emotion (please note that I did say seldom). The acting was good, though. Knowles lost herself in a role that required she take center stage and be a star. It may not sound like a stretch, but somehow it was, and I bought her turn wholeheartedly.
All this to say it was Hudson who stole the show – and this was reportedly quite fine with Ms. Destiny Child.
Earlier this month, the singer told reporters, “I'm already a star. I already have nine Grammys. Everyone knows I can sing. I did this because I wanted people to know that I can act and I can play someone so different from myself."
I don’t know about “different” per se, but by playing Deena Jones, Knowles has proven to yours truly that she has the acting chops to accompany and complement her many other talents.
Shockingly (not), of course, buzz-talk has also given way to on-set-jealousy-toward Hudson-talk – which is typical and, evidently, uncalled for.
“It's really unfortunate that everyone is saying I'm jealous of Jennifer. It hurts my heart because it's so clichéd,” Knowles said. “They're saying that I'm mad when I knew going into this that I was playing Deena."
The star did admit she would have liked to have sung Effie's show-stopping number song "And I Am Telling You I'm Not Going." But she didn’t; Hudson did, and it was just part of the reason why she owned Dreamgirls.
Hudson was a beacon of light, of fresh energy, in an otherwise ambitious attempt at commercial success that wasn’t all that original or as terrifically executed as everyone would like you to believe.
So see Dreamgirls for what it is, but love it because you will be watching a star being born.
My Rating **1/2
Photo: DreamWorks Pictures and Paramount Pictures.
Posted by Martin Haro at 10:23 AM

I saw the movie yesterday. I saw the original musical twice, have the original soundtrack and listen to it so much, I can sing everything. So, you can probably guess where I'm going. I had the musical in my head so I went in with no to low expectations because the marketing hype was so huge.

Overall, I was very surprised at how well done the movie was, and how it really held up as a movie, not just as a musical translated to screen. However, I was disappointed that the men's voices were so weak, and that they removed so much of what brought the musical (and the movie) alive -- the scenes where the characters sang, not talked, but sang the exposition such as the prologue to Jennifer Hudson's solo "And I'm Telling You."

The other disappointment I had is one I have with movie musicals as a whole: too many close ups. Pull that camera back so we can see something beyond the singer's nostrils. I know they wanted this to be Beyonce's big breakthrough movie, but by the end I was weary of all the adulation the director paid to her in close ups. Enough already! This is a musical, not a Vogue spread.

One more small thing and then I'm through. The girls (Jennifer Hudson and Beyonce) needed to have their movements choreographed for their solos. Their hands and arms were wooden and just hanging limp in mid air, and all of the mugging with the face alone does not communicate artistry or emotion. Some of the worst singers have electrifying stage presence and the ability to sell a song through gesture, eyes, body language. (Marlene Dietrich anyone?) These girls have voices, but need someone to teach them the art of embodying a song, bringing it to life with more than just lung power.

Thanks for letting me wrant.